A new vulnerability related to the parsing of TIFF images was found in the Microsoft Graphics component that affects Microsoft Windows, Microsoft Office, and Microsoft Lync. Microsoft published Security Advisory 2896666 explaining the details. Microsoft Fix it 51004 is available to alleviate the problem until an update is available.

Our initial research of the exploit indicates that this vulnerability is capable of affecting Microsoft Office versions 2003, 2007, and 2010 (Office 2010 vulnerability is limited to Windows XP and Server 2003 operating systems) and that it will fail on machines viewing the documents in protected mode (ActiveX support in documents disabled). While it is not easy to determine if computers have ActiveX enabled for Office documents, it is possible to profile vulnerable combinations of Microsoft Windows and Office to help understand the attack surface. Our telemetry feeds indicate the following breakdown of Microsoft Office versions deployed in enterprise environments:

Of the computers observed running Office 2010 (41%), only 2% of the computers were running Windows XP or Windows Server 2003. This leaves a representative attack surface of up to 37% of enterprise computers that are running both Microsoft Windows and Office.

The vulnerability allows attackers to execute remote code, and has been observed in targeted email attacks against Middle East and South Asia victims.

ROP (Return Oriented Program) is a technique that allows an attacker to execute code despite security defenses. The attacker hijacks program control flow and then executes carefully chosen machine instruction sequences, called "gadgets". Chained together, these gadgets allow an attacker to perform arbitrary operations on a machine employing defenses that thwart simpler attacks. For further info on ROP read here.

As we can see in the sample below, the remote download location for a dropper (hxxp://myflatnet.com/ralph_3/winword.exe) is embedded in the malicious Word document:

After successful exploitation, the exploit downloads an executable from the location above and saves it to C:\Documents and Settings\<username>\Local Settings\Temp\winword.exe.

After being run, Winword.exe decompresses another executable (Updates.exe) to the following location and subsequently executes it:

Updates.exe is a backdoor allowing attacker to gain control of the victim’s computer.

The fake document included in the Winword.exe RAR is saved to the same user folder. Two examples:

The document is opened after exploitation to pacify the potential victim.

When examining the contents of the fake documents, the attacks seem to be targeting Pakistan. However, we have seen these emails sent to recipients in UAE, India, and other South Asian countries, in industries such as Finance, Manufacturing, Software, and Travel. We observed sender domains appearing to be mostly from India and UAE (but those could be spoofed).

On October 28, 2013 a malicious email-based campaign was using two separate attachments, leveraging both the CVE-2013-3906 vulnerability in a Microsoft Word Docx attachment, as well as the more common CVE-2012-0158 (patched by Microsoft in 2012) in a Doc (rich-text-format RTF) attachment.

The Subject of the email was "SWIFT $142,000 $89,000". The Websense ThreatSeeker network has detected a few hundred of these messages being sent to a company in the financial industry based out of the UAE. The originating IP for the messages, 83.103.197.180 is located in Romania. 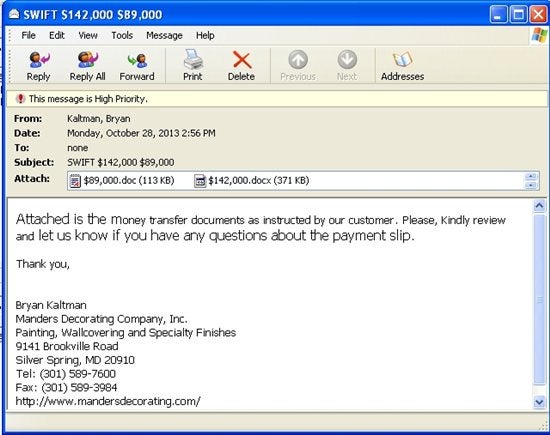 This file does not use the exact same code as the previous sample mentioned, but has an active X component with similar entropy.

Websense customers are protected with ACE™, our Advanced Classification Engine, and Websense ThreatScope™. According to Websense telemetry, attacks using this exploit have been very limited to date, but ACE is able to protect from all known samples at multiple stages of the attack chain as detailed below:

Beyond practicing due diligence in opening any attachments arriving by email, it is recommended that all users of the affected Office versions install Microsoft Fix it 51004. Websense will continue to monitor any developments related to the use of this vulnerability in future attacks.

Microsoft has released a patch for CVE-2013-3906.  Details are available in Microsoft Security Bulletin MS13

As this vulnerability could allow remote code execution we strongly recommend that you consider applying the patch at your earliest convenience.