Websense® Security Labs™ researchers, using our Websense ThreatSeeker® Intelligence Cloud, recently noticed an increased use of custom-generated attachment file names, and some use of password-protected ZIP files. Emails with banking/financial themes are being sent with executables packed in ZIP files, with file names matching the intended recipient. When the attachment runs on a victim's computer, a Trojan from the Zbot P2P family is downloaded via a Pony loader. Zbot is typically used to steal banking credentials as well as for the exfiltration of personally identifiable information (PII) and other confidential data for criminal gain. We saw such a campaign on July 15, 2013, featuring subjects like “IMPORTANT Docs - WellsFargo” and "IMPORTANT Documents - WellsFargo". Websense Cloud Email Security has detected and blocked over 80,000 instances of this campaign. We have proactively blocked similar cases since June 10. Just as we were getting ready to publish, we have noticed that Websense CES has proactively blocked another campaign, this time using fake emails pretending to be from Trusteer, trying to convince the victim to install an update for Trusteer Rapport software. Again, the attachment names are custom generated to match the recipient's user name (or  the first recipient in the case of multiples). So far we have blocked more than 36,000 variants of this latest campaign.

Let's take a look at the campaign from July 15 first: 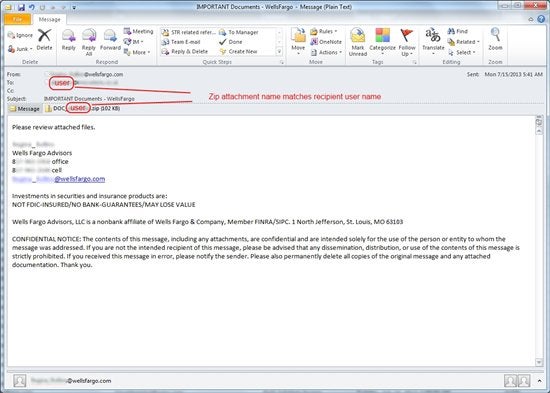 What's unique to these campaigns compared with others we have blocked in the past is the custom-generated attachment name. The cyber criminals seem to be trying to come up with incremental improvements to enhance their effectiveness.

By automating file name creation and linking it to the intended recipient's email username, they are presumably trying to socially engineer the potential victims to feel a little more at ease about opening the attachment. They might also be hoping to get around rudimentary blocking based on attachment file name. In the examples we've seen, the packed executable was the same across the same campaign burst. The potential victim first sees the ZIP file with their own unique name, so a search for the attachment file name in a search engine might not show anything suspicious.

A typical misleading icon (another common trait to malware used in email attacks) would cause the file attachment to look like this if the folder option "Hide extensions for known file types" is selected:

Savvy users will display all file extensions, which will clue them to the suspicious nature of the attachment:

If we analyze the behavior of the attachment using Websense ThreatScope™, we can see the Pony loader module communicates to:

which is an empty Post transaction in this case, since there was no information to exfiltrate.

For the sake of curiosity, we can check out the admin login panel of the Pony loader on that page: 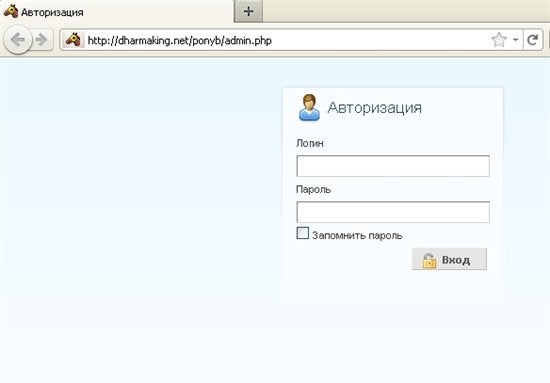 The Pony loader sends GET requests to download further executables from other locations:

It also includes communication to legitimate sites to mask its malicious activity.

You can see the full ThreatScope report here.

Anti-Virus detection at the time of the attack is pretty dismal, only 4 out of 45.

Dropped executables are recognized as malicious by ThreatScope. See reports here and here.

But as is the case most of the time, AV vendors eventually update their signatures, and 19 out of 47 now detect the dropped binary as a Zbot Trojan variant.

For comparison sake, we decided to run another ThreatScope report, to see how our own analytics fared after they had a chance to update.

Here's what we found:

As expected, some of the dropped files hosts are not responding anymore. But one actually delivered a new binary:

The ThreatScope report indicates that it is malicious, as seen here. In addition, Websense ACE™, our Advanced Classification Engine, had generic detection against it.

We should also note that ACE updated the categorization of the Uncategorized hosts seen in the initial report:

In an older campaign example (June 14, 2013), we can see another feature that has been used frequently in the last few months.

Not only does the ZIP attachment file name match the recipient's user name, it is also password protected, with the password supplied in the email body. This is an obvious attempt to get around automated analysis and further increase the window of exposure before security vendors update their detection for the malware variant. 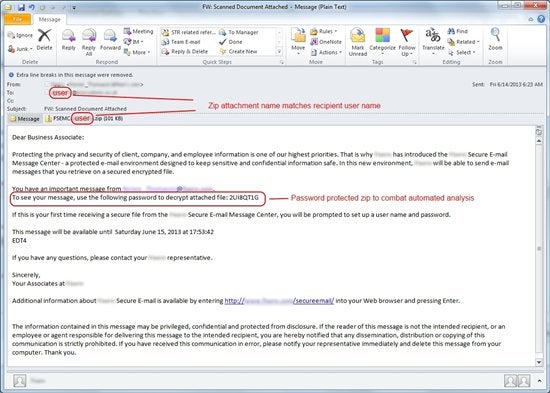 The attachment (again hiding extensions for known file types) is displayed as:

Similar behavior can be seen in the ThreatScope report.

And again, AV is not quite up to speed.

See the dropped executables ThreatScope report, compared to VirusTotal at the time of attack, which is a little better at18 out of 47. 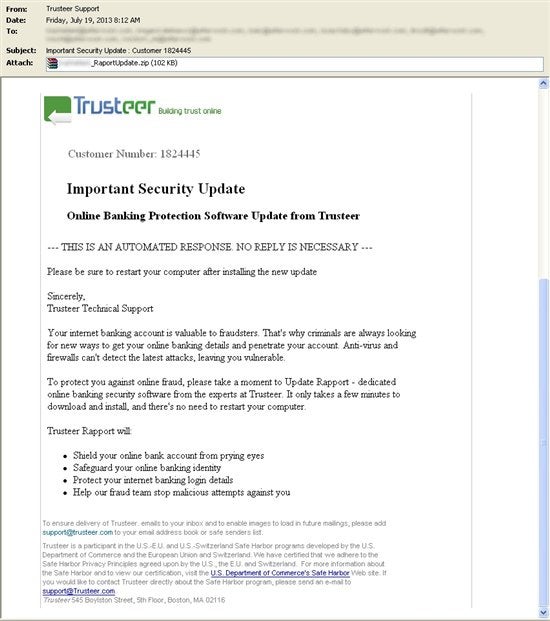 As in the other samples, the attachments are named with a custom generated file name that matches the username of the first recipient. We can assume that since Trusteer are a software company, the cyber criminals are trying to lure potential victims to be less suspicious of the executable packed inside the attachment.

Similar behavior to above samples, see ThreatScope report here, and compare to Virus Total at 5/47

It is interesting how simple some of the lures are, but the attackers might be getting enough monetary gain from using them and employing the small, incremental changes described above.

Websense has provided protection against this campaign in multiple stages. As an email attack carrying attachments, this campaign uses some of the stages outlined in our whitepaper describing the 7 stages of Advanced Threats.

Dropped Files - ThreatScope recognizes the malicious behavior of the dropped executable files. In addition, ACE protects against the URL hosts.

Data Theft - Websense DLP (data loss prevention) tools can detect and stop the exfiltration of sensitive information, like the banking credentials and PII that Zbot targets.