Home:Blogs:Ebola Spreads - In Cyber Attacks Too

The Ebola virus has been spreading in West Africa since first appearing in Guinea in December, 2013. Its rising rate of infection, high mortality rate, and challenging isolation and containment requirements have raised world-wide alarm.

Against that backdrop, Websense® Security Labs has found two distinct malicious campaigns that take advantage of the Ebola issue, and it's probably safe to assume that the topic will continue to be abused in the future.

At the beginning of the campaign, the messages contained a redirect URL that led victims to a download location for a RAR archive. The archive contained the DarkKomet RAT/Backdoor. DarkKomet is a Remote Administration Tool (RAT) that provides full access to remote clients. It is used by attackers to control the victim's computer and steal information. In more recent emails, the campaign evolved to include direct attachment of executables, and then to direct attachment of a RAR archive containing the executable. The sample below shows the RAR attachment variant. 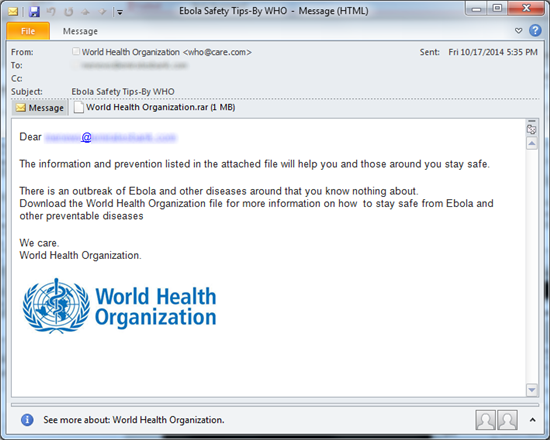 ThreatScope has identified malware samples as malicious. Here are two file variants in the campaign:

On October 14, 2014, iSIGHT discovered vulnerability CVE-2014-4114, used in the Sandworm campaign that targeted NATO, the European Union, and members of the Telecommunications and Energy sectors. CVE-2014-4114 can allow remote code execution if a user opens a specially crafted Microsoft Office file containing an OLE object. The vulnerability is in all supported releases of Microsoft Windows, excluding Windows Server 2003. Because the vulnerability does not involve memory corruption that can result in shellcode, and because it is in the category of 'design error', protection methods like DEP and ASLR are not effective. Example exploit code for CVE-2014-4114 has been spotted posted on the web. Criminal actors could potentially use it to build a vulnerable PowerPoint file to spread the malware. Also, shortly after the disclosure of CVE-2014-4114, a very similar vulnerability that also targets OLE objects, surfaced  and is described as CVE-2014-6532. While CVE-2014-4114 has been patched by Microsoft, CVE-2014-6532 still awaits a patch.

Websense® Security Labs has noticed that the Ebola topic has been abused in relation to CVE-2014-4114. A sample from a third-party source, named "Ebola in American.pps", was leveraging CVE-2014-4114 to download and execute a payload from a remote address via the SMB protocol, which most of the time isn't allowed to connect to public Internet addresses.

It is possible to detect CVE-2014-6352 using Yara. Here is a Yara rule that can be run against Microsoft Office files to surface the vulnerability. The rule could use a bit of tweaking and expanding to include INF files:

$c = "This program cannot be run in DOS mode"

Websense customers are protected against this threat with ACE, our Advanced Classification Engine, at the different stages of the attack detailed below:

Forcepoint is the leading user and data protection cybersecurity company, entrusted to safeguard organizations while driving digital transformation and growth. Our solutions adapt in real-time to how people interact with data, providing secure access while enabling employees to create value.
Learn more about Forcepoint
Email,Zero Trust