Websense Security Labs Threatseeker® network has detected that Google Image search returns poisoned pictures when searching on celebrity child "Presley Walker". We first found on Monday that all the image search results took users to a notorious exploit kit – Neosploit. Later, it changed to redirecting users to rogue AV sites. As we publish this blog, the search results are still poisoned and are leading to Neosploit again. Websense customers are protected from both types of attack by ACE, our Advanced Classification Engine.

The search results for "Presley Walker" through Google Image:

Let's take a look at the first attack case. When a user clicks the pictures on the top line, the user will be redirected to a Neosploit exploit page.

Below is one of the redirection chains used by this exploit kit: 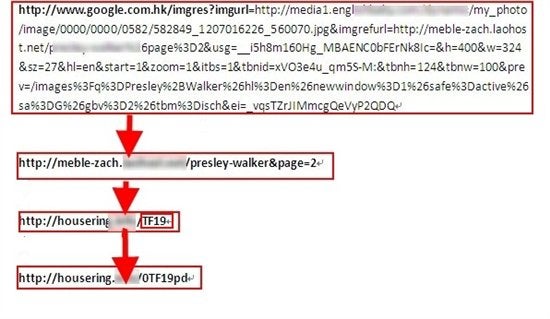 From the chain, we see the third URL is the malicious site holding the exploit code. We found that all the exploited sites are hosted on the same IP 66.235.180.91, and interestingly, they constructed it with the same path namedTF19, which looks like a pattern of this campaign. At last it will trigger appropriate vulnerabilities targeted by this exploit kit according to the user's operating system and browser. From the chain above we see it downloaded a PDF file that targeted three Adobe Reader vulnerabilities. This PDF file is heavily obfuscated and has a relatively low VirusTotaldetection.

The list of URLs hosted on the IP, as shown from our Threatseeker network:

Neosploit is a well-known exploit kit in the black market. The authors reportedly stopped supporting and updating the exploit kit due to financial problems, but variants of Neosploit have been updated frequently. The variants may contain MDAC (CVE-2006-0003), ActiveX (CVE-2008-2463, CVE-2008-1898), and three Adobe Reader (Collab.getIcon,Util.Printf, Collab.collectEmailInfo) vulnerabilities, among others.

The second case is one of the common tricks black hat SEO campaigns always use: luring users to download fake antivirus software called InstallInternetProtectionXXX.exe. From the VirusTotal scan result, only 20% of antivirus engines detected this malware.

The rogue AV page when using Firefox to surf the Web: