Websense Security Labs™ ThreatSeeker™ Network has detected that the ninemsn support Web site (ninemsn.com.au) has been compromised and injected with malicious code. The malicious code was identified to be part of the Gumblar mass injections, and the injected code is hidden deep within the ninemsn ad engine, served on request. The injected code leads to a site that has also been compromised by Gumblar. The compromised code is hidden specifically within the "Women's Weekly" banner script. Other ad banners are not affected.

Screenshot of the Web site: 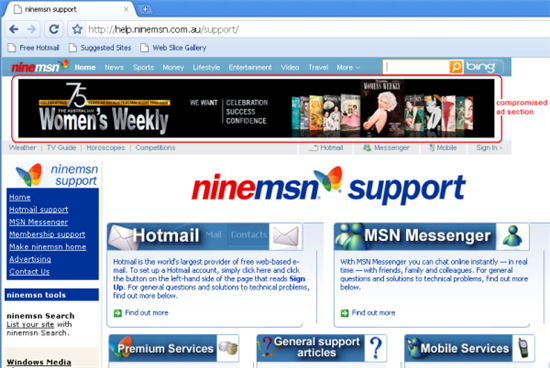 Screenshot of the ad element:

At this time, the malicious code isn't available or reachable, but this could change at any time. An interesting implication is that this ad can be dynamically served on multiple Web pages within ninemsn. This is unlike a typical injection where Web sites are compromised in a single static page; in this case, the infected banner ad can be pulled to various locations within the site, serving its malicious purpose silently.

Ninemsn, a joint venture between PBL Media and Microsoft, is one of the most visited portal Web sites (Alexa traffic rank 573) delivering online and mobile content, news, information, entertainment, and social networking capabilities.

We contacted Microsoft when we discovered the attack and the ad banner has now been removed from the ninemsn support Web site.

Websense® Messaging and Websense Web Security customers are protected against this attack.