The CVE-2014-0322 exploit has been seen hosted and delivered from the following URL, which was first seen by Websense on January 20, 2014:

The use of the very similar domain name may indicate that the French aerospace association is the target, but this domain does not appear to be a campaign with active lures, yet.

An anonymous DNS registration service was originally used to register the domain "assso.net" which was updated to direct users to the malicious site on January 20, 2014.

As of January 28, 2014 gifts.assso.net resolved to 173.252.252.204. This IP address is geolocated to Santa Clara, Calif. We noticed the SHA1 for Tope.swf being uploaded to VirusTotal on January 20 (the same day as the fake gifas.assso.net site was set up), with no detection at the time by AV vendors. Presumably this was done by the attackers to check AV coverage for their malware before starting their attacks, further indicating that January 20 was the initial rollout of this campaign of attacks using this 0-day.

Similarity with other observations of CVE-2014-0322

As is in the HTTP stream shown below, visitors going to hxxp://gifts.assso.net are linked to include.html, which sets up the ROP exploit and "Tope.swf" Shockwave Flash file (SHA1: 910de05e0113c167ba3878f73c64d55e5a2aff9a) which is utilized after the CVE-2014-0322 use after free vulnerability to access memory through ActionScript in the SWF file. 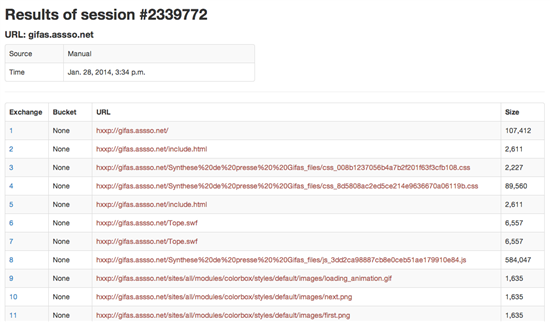 Additional similarities to the attacks on the US Veterans of Foreign Wars website include the Javascript-based check for Microsoft's EMET (exploit mitigation toolkit) which is attempted to be loaded as an XML to determine whether the DLL is present. If the DLL is verified as existing, the attack JavaScript aborts the attack.

Below is code located in the Tope.SWF that leads to a second stage dropper called "Erido.jpg". Code snippet below :

The code above shows the Shockwave Flash ActionScript downloading content but not actually storing it to a file. The follow-on code below shows a buffer being written and read as "little endian" to denote the order for the byte array to be executed. The _local(x) variables look to be calculations in memory which makes us believe this is an "in memory" only attack, presumably to make antivirus detection more difficult. 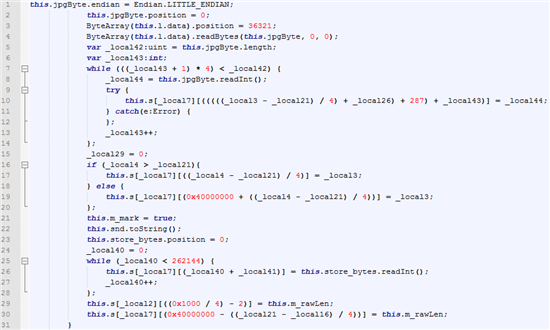 Analysis of the Malicious ActionScript (AS3) Code 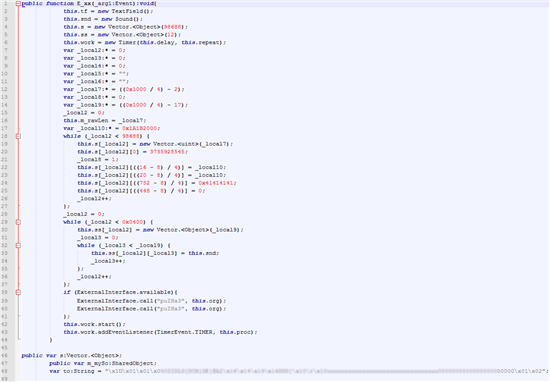 In the code above, the string:

appears to  be the culprit responsible for causing the vulnerability to return to malicious memory space allocated.

The similarities in the exploit, delivery and search for the EMET.DLL indicate that the same group of threat actors is most likely behind the malicious URL above and the attacks that have been covered by FireEye. More detailed analysis coming soon.

This attack is known to check for the presence of Microsoft's Enhanced Mitigation Experience Toolkit (EMET).  If it is found then the exploit attempt terminates.  You can find out more about how to deploy EMET in Microsoft's overview here and the EMET knowledge base article.

Forcepoint is the leading user and data protection cybersecurity company, entrusted to safeguard organizations while driving digital transformation and growth. Our solutions adapt in real-time to how people interact with data, providing secure access while enabling employees to create value.
Learn more about Forcepoint
AW