Home:Blogs:My email address was shared on Twitter, but who cares?

Websense Security Labs™ has found that thousands of businesses and consumers are putting themselves at risk each day by publicly revealing their email addresses on Twitter.

We conducted research on how data that might be considered private is exposed via Twitter. The research focused on shared data, in particular email addresses, that can potentially be used against the one (or the organization) that shared it. During the research we monitored Twitter over a 24 hour period and found that users were publicly sharing email addresses connected with their inboxes, social media identities, and bank accounts. This leaves them open to advanced ‘social spear phishing’ attacks and spam campaigns.

Our research found that thousands of Email addresses are publicly shared daily via Twitter: 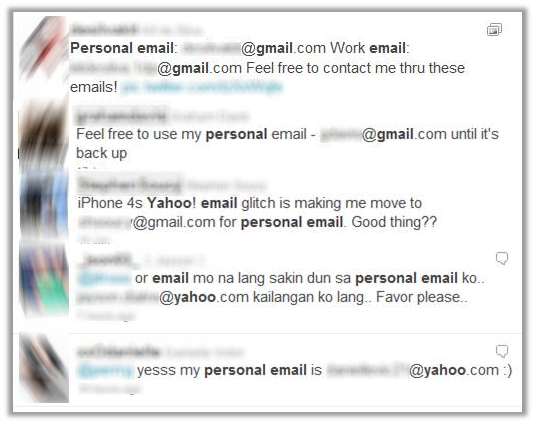 Gmail, Hotmail and many other free web-based email services are particularly under threat as cyber criminals can harvest social information on individuals via Twitter to break into these accounts.

We realise that sometimes you need to share your email address. Here are some security tips on how to best avoid your shared data potentially being used against you:

• Treat emails from friends linking you to other sites with caution

• Never use passwords that can be inferred from publicly accessible information

• Since email is an often used route into a company by cybercriminals, ensure your email security has superior malware protection against modern threats