Home:Blogs:New Mass Injection Wave of WordPress Websites on the Prowl

The Websense® ThreatSeeker® Network has detected a new wave of mass-injections of a well-known rogue antivirus campaign that we've been following in Security LabsTM for months. The majority of targets are Web sites hosted by the WordPress content management system. At the time of writing, more than 200,000 Web pages have been compromised, amounting to close to 30,000 unique Web sites (hosts). The injection hijacks visitors to the compromised sites and rediects them to rogue AV sites that attempt to trick them into downloading and installing a Trojan onto their computer.

The injected code is very short and is placed at the bottom of the page, just before </body> tag.

After a three-level redirection chain, victims land on a fake AV site. In this example, the first chain is the ".rr.nu", and the landing site is the ".de.lv" top-level domain, but the landing site keeps changing. The rogue AV site appears to perform a scan on the computer and scares the user by displaying fake malware detections of various kinds of Trojans. The page looks like a Windows Explorer window with a "Windows Security Alert" dialogue box in it.  The fake scanning process looks like a normal Windows application, however, it is only a pop-up window within the browser. The fake antivirus then prompts visitors to download and run their "antivirus tool" to remove the supposedly found Trojans. The executable is itself the Trojan. 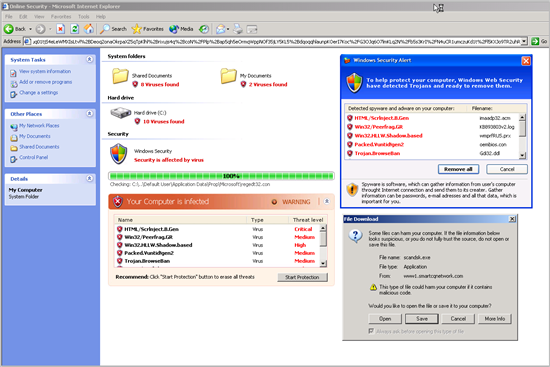 It is, we think, an interesting observation that more than 85% of the compromised sites are in the United States, while visitors to these web sites are more geographically dispersed. We think it's useful to note that while the attack is specific to the US, everyone is at risk when visiting these compromised pages.

Country of origin of visitors:

Websense Security Labs continues to monitor the evolution of this campaign. Websense customers are protected with the Advanced Classification Engine, ACE, which detects compromised Web sites in real-time.