Websense® researchers monitor sites like Pastebin, Facebook, Twitter, Blogspot and others to keep our finger on the pulse of hacking and other malicious activities. Pastebin, in particular, has become a popular place for hackers to show off their latest exploits.

Our researchers recently observed a significant increase in malicious links posted to Pastebin: 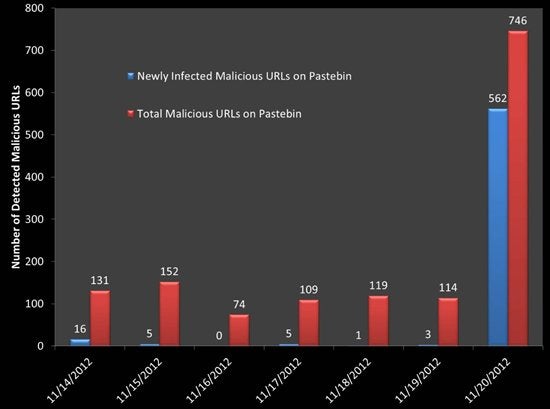 On Tuesday, November 20, we detected a spike in compromised URLs posted to the site. A Pastebin user named “PCA-Master” was responsible for posting 572 of these compromised URLs. 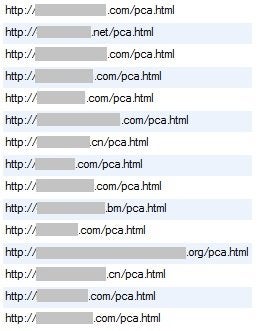 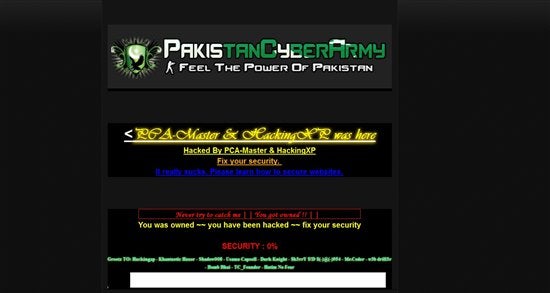 In all cases, Websense customers were protected by the real-time analytics offered by Websense solutions.

According to its FAQ, “Pastebin.com is a website where you can store text for a certain period of time. The website is mainly used by programmers to store pieces of sources code or configuration information, but anyone is more than welcome to paste any type of text.”

Despite its Acceptable Use Policy that specifically prohibits posting email lists, login details, password lists and personal information (among other items), all of these are routinely posted to Pastebin.

The "Pakistan Cyber Army" has been around for some time and regularly compromises large numbers of hosts in various countries, including many Indian websites, especially government sites. According to the Pakistan Cyber Army site:

Pakistan Cyber Army images have recently plastered sites in many countries. According to HackRead, a website with news about hacking, most of the affected sites belonged to “small and local businesses, such as banks, chemical factories, TV channels, online gaming and automotive industry etc."

While hackers pose a serious problem for many organizations, on a lighter note, students from HaBetzefer, an Israeli school of advertising and art, and ad agency McCann Digital Israel have produced a campaign called "If you can't fight them, redesign them" to combat the plague of what students are calling “uninspired designs each time: black background, grotesque low-res images and unbearable amounts of text." One of the traits associated with hackers is their lack of style, as evidenced by the Pakistan Cyber Army’s hack page.

The students sent cheerful redesigned hack pages back to hacker groups with the friendly message, “We would like to end all cyberwars, but in the meantime -- if you must hack our sites, at least leave something beautiful.” So far, none of the hackers has taken them up on the offer, but it’s clearly their loss: 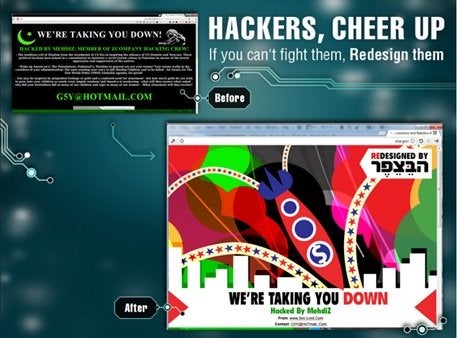