During the Republican Presidential Debate on November 9. 2011, Rick Perry’s speech garnered plenty of attention -- but probably not the kind he sought.

Social Media has popularized this YouTube video, with the number of views skyrocketing to 1.7 million in just two days, thereby making it a new member of the Viral Video category as well as a popular search topic. 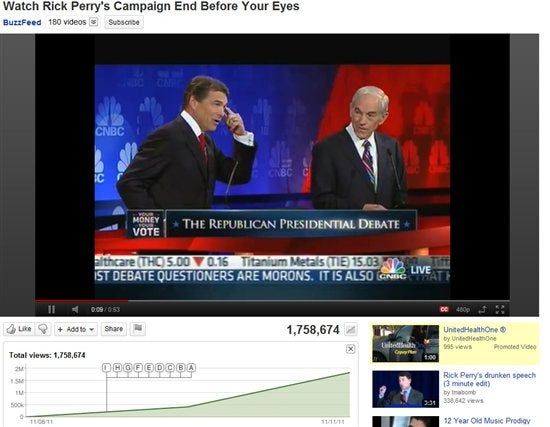 Trending searches such as the passing of Amy Winehouse and the Oslo Bombing as well as the rumors of Gaddafi's death, generated spam attacks in a short time span.

Here are a few of these.

On another note, here are some interesting statistics on bandwidth and potential productivity loss surrounding Rick Perry's debate performance:

The amount of time spent viewing this video accounts for 1,078 days, or 2.95 years. That is a staggering amount of time, considering it took only two days.

Streaming media may be a bandwidth concern for companies; the amount of views of this video equals to 167 gigabytes of bandwidth.

Popularity can quickly become a curse. One minute you are rising in charts on YouTube, the next your name is regrettably associated with malicious content.

Websense ® customers are protected from the dangers of these sites by ACE, our Advanced Classification Engine.