Home:Blog:Zbot and Black Hole Exploit Kit "all in one" fake Facebook notification Emails

Websense® Security Labs™ Threatseeker® network has detected a new malicious email campaign that masquerades as originating from Facebook. The campaign appears to actually be originating from the Cutwail/Pushdo spam bot. This time round, the Cyber criminals employ two attack vectors: social engineering and an exploit kit. Both end up with the Zeus/Zbot Trojan installed on the targeted machines.

Websense customers are protected from this attack with our Advanced Classification Engine analytics, our suite of technologies within TRITON.

Here is an example of a malicious email in Spanish:

The malicious email is spoofed to appear to be coming from Facebook.com and says: "Hi, someone loves your photo comments, please click on the link to see all comments". It provides a fake URL disguised as a formal Facebook link. Once clicked, the user is redirected to an attack page and is prompted to download and run an "update" from Facebook. The "update" file is a Zeus/Zbot Trojan variant. At the time of writing, the file had only a 7% detection. 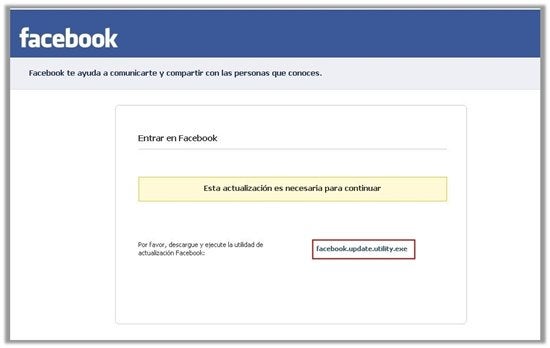 The attack isn't over yet. While the fake Facebook page loads, the user's machine is attacked silently with several exploits in the background. The exploits are sent via an iframe contained in the fake Facebook attack page. This process happens silently when the attack page is loaded. The exploits are loaded from one of the most prevalent exploit kits today - the Blackhole exploit kit. Any successful exploitation results in the Zeus/Zbot Trojan installed silently on the user's machine.

Here is an example iframe from the Facebook attack page that points to Blackhole exploit kit: