February 3, 2013 not only marks the start of Super Bowl Sunday, it could also signify the arrival of a new untethered iOS jailbreak.

A newly formed hacking group, going by the name of evad3rs, is reportedly close to completing their latest iOS 6.1 jailbreak. More importantly this jailbreak works on the A5 and A6 chip architectures in the latest flagship iOS devices.

Previous reports claimed that the group held back releasing the jailbreak in the knowledge that Apple would soon release the long awaited iOS 6.1 update that surfaced on Monday. The group has also stated that publishing the exploit earlier would allow Apple to develop a patch to counter-act their efforts. So, immediately after the iOS 6.1 release, some four and a half months after the original iOS 6 release, the group has said that they are ready. 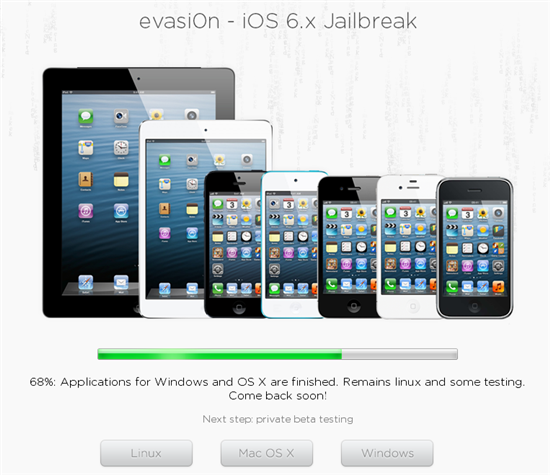 Websense® Security Labs™ has seen companies try to use previous iOS device jailbreak activities in the corporate environment, with download and usage of redsn0w and absinthe hacks. In addition to these common tools, download of unauthorized iOS Apps outside of iTunes has also been very active. Websense ThreatSeeker® Network has shown the Bring Your Own Device (BYOD) phenomenon is alive and kicking in modern work places.

In the coming days, Websense Security Labs will keep a close eye on further developments with this new jailbreak.

The 'evasi0n" jailbreak has been released overnight and made available to the public along with several download mirrors. The popularity has exceeded many of the mirror's account bandwidth limits causing slow and failed downloads. The jailbreak, namely evasi0n version 1.0, came as a standalone tool where you simply set and forget. It takes just a few minutes the iOS devices to be jailbroken. 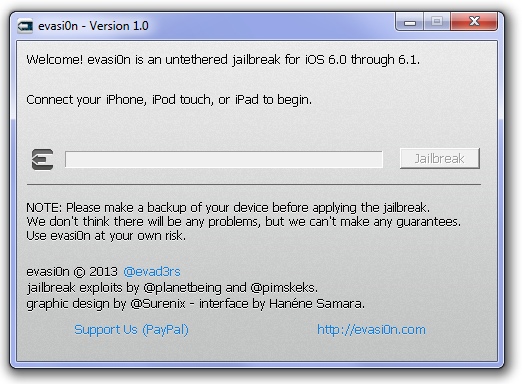 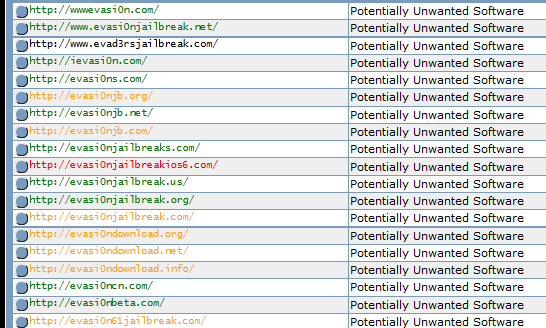