The Andromeda botnet, initially discovered in late 2011, is a highly modular platform for malicious activity. While it consists of key loggers, rootkits, anti-VM, anti-debugging and proxy features, it is mostly used as a method to establish a reliable backdoor to further deliver additional malware. Recently Andromeda was known to distribute Simda, a credential stealing malware with over 770,000 reported infections, which was taken down by INTERPOL.

The distribution of Simda by Andromeda is by no means exclusive, however its involvement with this malware showcases it's prevalent use. Andromeda is one of the highly configurable malware tools available for sale in the underground community.

Websense® Security Labs™ monitors and detects the Andromeda family of malware. Our Collective Threat Intelligence platform, where we correlate email, web and file indicators, provides a snapshot view of the Andromeda botnet as shown below:

Andromeda is distributed via malicious emails containing attachments or links to compromised websites hosting Exploit Kit content. The screenshot below shows Andromeda arriving via a malicious attachment document containing a VBA macro that is not obfuscated. The macro tries to download an executable and run it.

Alternatively, another set of challenges  is presented by attempts to spread via links to compromised sites redirecting to exploit kits, as discussed in our previous blog “Angler Exploit Kit – Operating at the Cutting Edge”. Also to be noted is that Angler, along with Sweet Orange, and Blackhole exploit kits are known to have distributed Andromeda. 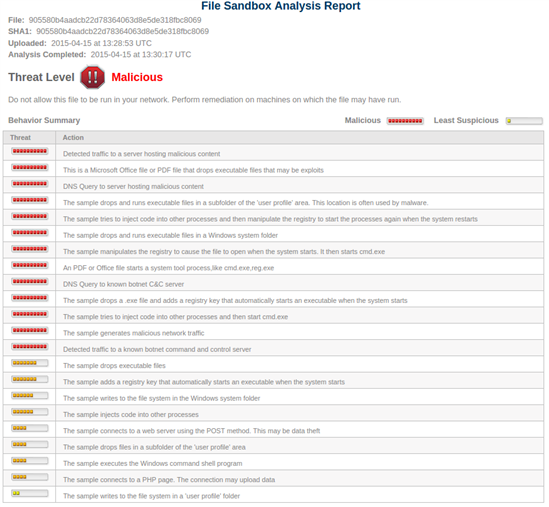 Andromeda checks for running processes, such as vmwareuser.exe and wireshark.exe, and copies itself to the user's profile folder or the All Users' profile folder before performing registry modifications. This is an attempt to prevent security researchers from ever gaining a full understanding of the malware or to simply fool sandbox technologies. In the case of Websense File Sandbox, a series of measures taken to circumvent evasion of the sandbox environment allow for analysis and detection of samples.

Intercepted command and control communication is as follows: 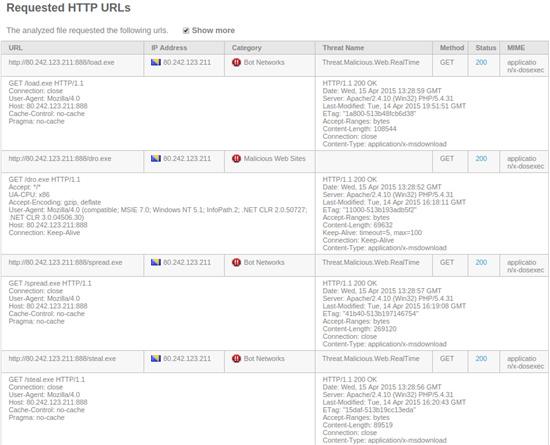 With a wide range of malicious activities attributed to this malware, defeating it requires a multi-phase approach. Websense customers are protected at the time of initial email delivery via the TRITON AP-EMAIL offering. Should users reach malicious content, protection is offered via ACE, the Websense Advanced Classification Engine, at the different stages of the attack kill chain as detailed below: