In the current era of mass malware it's becoming increasingly rare to find something beyond the ‘usual suspects’ we see being spread by high-profile botnets on a regular basis: Dridex spread by Necurs, the ever-increasing number of ransomware families, cryptocurrency miners, credential stealers… the list goes on. These sorts of malware generally make up the majority of incoming malicious samples and are, from a researcher's standpoint, typically not very interesting. However, in amongst the digital haystack there exists the occasional needle: we recently came across a sample apparently disguised as a LogMeIn service pack which generated notable amounts of 'unusual' DNS requests. Deeper investigation revealed something of a flawed gem, ultimately designed to steal magnetic stripe payment card data: a hallmark of PoS malware.

Point of Sale malware has been around for some time and has been deployed against a broad range of businesses from retailers to hotel groups. However, this appears to be a new family which we are currently calling 'UDPoS' owing to its heavy use of UDP-based DNS traffic. At the time of writing, it's unclear whether the malware is currently being used in campaigns in the wild, although the coordinated use of LogMeIn-themed filenames and C2 URLs, coupled with evidence of an earlier Intel-themed variant, suggest that it may well be.

Note: We have been in contact with LogMeIn throughout this investigation to help determine whether their services or products may have been abused as part of the malware deployment process. No evidence of this was found and it appears that the use of LogMeIn-themed filenames and C2 domain by the actors behind the malware is a simple ‘camouflage’ technique.

Update: LogMeIn have published an advisory notice to their customers re-iterating the above. You can read their statement here.

A set of two - service & monitor

Behavioural analysis of the initial sample we discovered, a file named logmeinumon.exe, showed it contacting a similarly LogMeIn-themed C2 server hosted by a Swiss-based VPS provider (details below - note the use of an ‘L’ rather than an ‘I’ in the spelling of logmeln).

Investigation of the C2 revealed it also to be hosting the original dropper file, update.exe. This file is a 7-Zip self-extracting archive containing LogmeinServicePack_5.115.22.001.exe and logmeinumon.exe. Details of these files are in the table below.

Both of the LogMeIn-themed files have a compilation timestamp of 25 October 2017, suggesting that this is a relatively recent campaign.

Upon executing update.exe, its content is extracted to the %TEMP% directory and LogmeinServicePack_5.115.22.001.exe automatically launched using 7-Zip's built in RunProgram feature.

LogmeinServicePackLogmeinServicePack_5.115.22.001.exe – which we have called the service component – is responsible for setting up the malware by placing files into the System32\LogMeInUpdService directory and creating a new system service for persistence. It does this via a batch file with a semi-random filename embedding standard Windows commands for file and service operations. Once finished it passes over execution to the monitoring component by launching logmeinumon.exe.

This monitoring component has an almost identical structure to the service component. It's compiled by the same Visual Studio build and uses the same string encoding technique: both executables contain only a few identifiable plain-text strings, and instead use a basic encryption and encoding method to hide strings such as the C2 server, filenames, and hard-coded process names.

Despite maintaining a small footprint – only 88kb in size – the monitor component is a multi-threaded application which creates five different threads after its initialisation code is completed. This initialisation code is mainly responsible for decrypting and decoding the malware's internal strings, attempting to carry out an anti-AV/VM check, and either creating or loading an existing ‘Machine ID’ stored in a file called hdwid.dat in the same directory where the executables are deployed. This randomly generated identifier is used as {Machine ID} in all of the DNS queries detailed within this blog.

For the anti-AV and anti-VM solution, there are four DLL and three Named Pipe identifiers stored in both service and monitor components:

However, only the monitor component makes use of these and, moreover, the code responsible for opening module handles is flawed: it will only try to open cmdvrt32.dll – a library related to Comodo security products – and nothing else.

It is unclear at present whether this is a reflection of the malware still being in a relatively early stage of development/testing or a straightforward error on the part of the developers.

After initialisation, including after reboots, the monitor component performs a DNS query on the embedded C2 address and retrieves the external IP address of the infected machine via an HTTP GET request:

The first time the malware is run, it also generates a batch file called infobat.bat which is similar in structure to the one examined for the service component. Again, this file uses a number of standard Windows commands to create a comprehensive fingerprint of the infected machine containing network, system, route, and process related information. This data is written to a local file called PCi.jpg and sent to the C2 server via DNS. Once complete, a flag is set in hdwid.dat. 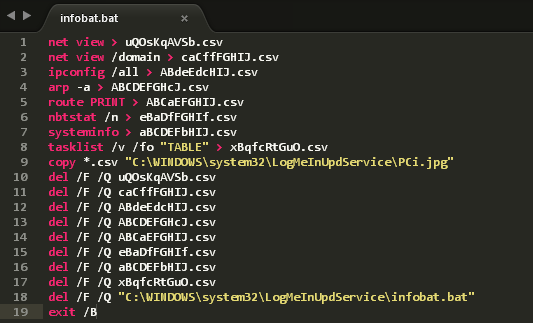 Whether this is intended for use later for lateral movement is unclear, but this information alone would be sufficient to treat this executable as malicious: the network map, list of running processes and list of installed security updates is highly valuable information.

After the initial HTTP request to determine its external IP address, the monitor component appears to communicate exclusively via fake DNS requests, all of which follow the format

where {Machine ID} is always 15 characters long, {Message Type} is taken from a set of pre-defined strings, and the actual message components 'xxxx' can vary in length, but never exceed 31 characters.

The bin messages are used to transmit the initial burst of data gathered into PCi.jpg by the infobat.bat process, while ping is a heartbeat message sent to the C2 every 60 minutes.

Info messages - as the name suggests - are purely informational and are despatched alongside ping messages:

The note and trp message types required further analysis and relate to the core functionality of the malware. Investigating the functionality spread across the additional threads revealed a process designed to collect Track 1 and Track 2 payment card data by scraping the memory of running processes. These processes are checked against an embedded and pre-defined blacklist of common system process and browser names with only ones not present on the list being scanned. 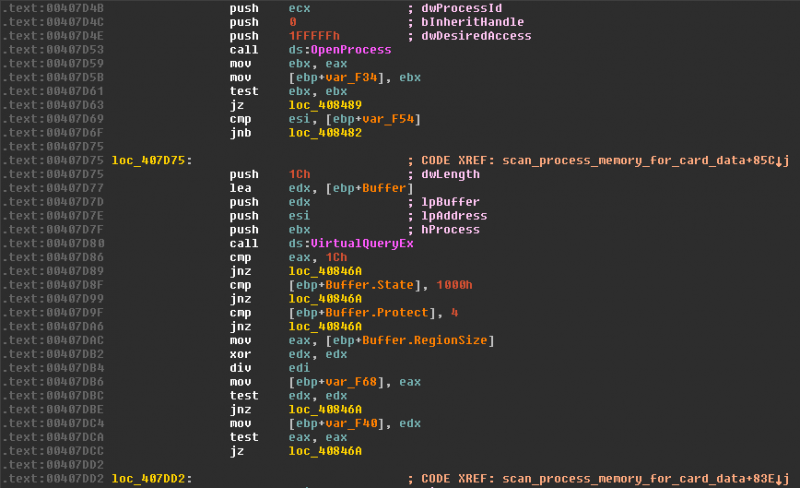 If Track 1/2 data is found in memory it will be extracted as is, converted to and sent as a trp message. A note message will be also generated and transmitted with the following content:

The malware further logs this process name to a file called sinf.dat, the number of total processes with successful extraction to hdwid.dat and saves a hash of the trp message to udwupd.kdl, presumably for the purpose of keeping track of what has already been submitted to the C2 server.

All five message types are logged to the {Machine ID}.dat file prior to transmission.

As the underlying intent of the malware became clear to us, we attempted to identify further samples from the same family to determine whether this was something new (and possibly still being tested before deployment) or part of an ongoing campaign.

These efforts revealed another service component, but unfortunately not the corresponding monitor nor the parent 7-Zip SFX archive. Interestingly, this second service component was named ‘Intel Upgrade Services’ and apparently intended to masquerade as an Intel update as opposed to a LogMeIn update.

Based on the compilation dates of the executables, the Intel-themed sample was created two weeks prior to the LogMeIn-themed one on 11 October 2017. Whether this is a sign that authors of the malware were not successful in deploying it at first or whether these are two different campaigns cannot be fully determined at this time due to the lack of additional executables.

The coding style and techniques seen within the malware can hardly be described as outstanding. Beyond the faulty evasion code noted above, using data files written to disk instead of working predominantly in memory – besides leaving unnecessary trails – is rarely the trademark of bleeding edge malware and, equally, there are more advanced ways of fingerprinting a PC and generating a report. That said, the method used in this sample does appear to get the job done.

On the other hand, DNS-based communication and data exfiltration is genuinely unusual – although not unique – and can be quite effective. Nearly all companies have firewalls and other protections in place to monitor and filter TCP- and UDP-based communications, however DNS is still often treated differently providing a golden opportunity to leak data.

The overall impression is of a piece of malware inspired by the success of (and some of the better ideas and techniques employed by) its predecessors.

Detection rates for the malware are still very low for the monitor component at the time of writing. Visibility is always an issue when it comes to non-traditional malware: samples which do not target standard endpoints or servers can quite easily be missed because of the lack of focus on protecting these sorts of systems.

Discovering a unique piece of malware is a rare event these days and UDPoS, while unusual, is not a new concept. There have been several Point of Sale malware families identified over the past few years, all with the same goal: harvesting credit card data on a large scale – consider how many different cards may be used in stores, bars, or restaurants across the course of a day, let alone weeks or months.

From a consumer standpoint, protecting oneself against this sort of threat can be a tricky proposition for individuals: a PoS terminal could conceivably remain infected for significant lengths of time. However, enabling reporting on your credit card activity (many banks offer SMS, Push, and email alerts) can greatly reduce the time of discovery – and therefore recovery – if abuse does occur.

For many businesses, the situation may not be much better: legacy PoS systems are often based on variations of the Windows XP kernel and, in large retailers, may be present on hundreds or even thousands of devices. While Windows POSReady is in extended support until January 2019, it is still fundamentally an operating system which is seventeen years old this year.

As UDPoS highlights, exfiltrating stolen credit card data can and will result in unusual patterns of activity on the machines (DNS traffic in this case). By identifying and reacting to these patterns, businesses – both PoS terminal owners and suppliers - can close down this sort of attack sooner.