Home:Blogs:Uber Hack – What we know so far

Earlier today, Friday,16 September, Uber communications team confirmed they were investigating the extent of an active cybersecurity incident that was originally reported in the New York Times.

The hack has reportedly left multiple production systems down and internal employees unable to use the company’s main communication tool, Slack. Allegedly, the initial intrusion was orchestrated through social engineering, using a ‘MFA Fatigue’ technique to spam an internal employee with multiple multi-factor authentication prompts, until the internal employee hits accept to make the prompts disappear. Once inside, the attacker alleges (via a Telegram account that was referenced in the attack itself) that they logged into the VPN and scanned the internal intranet.

Inside the internal intranet were some PowerShell scripts that the attacker supposedly used to access core services such as AWS, Slack and SentinelOne administrator accounts. The attacker in question used the following hashtag when they posted into the Slack channel: 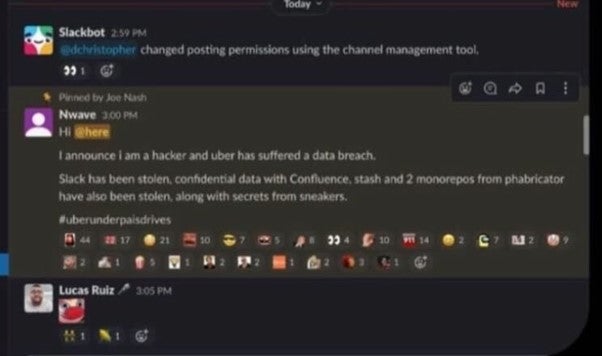 This may signal some intentions behind the attack, or be intended as a form of hacktivism. However, this is still unconfirmed. As you may remember, Uber was victim to a 2016 breach, which it initially tried to cover up and ultimately paid a $148 million fine in relation to the botched response to the attack.

More concrete information will emerge about the attack in the coming days. In the meantime, there are some key takeaways:

This potential attack has confirmed the importance of implementing Zero Trust principles. In the meantime, see security updates from Uber here.