The news of U.S. federal cybersecurity breaches in the headlines appears to be growing. Stories like Russian hackers infiltrating SolarWinds last year, resulting in a breach across at least a dozen Federal agencies and various China-linked hacking groups penetrated the defenses of dozens of U.S. government agencies, defense contractors, financial institutions and other critical sectors earlier this year are becoming far too prevalent in the news cycles.

Cybersecurity Risks in the Federal Government

In the latest Ponemon Institute research, "Cybersecurity Risks in the Federal Government,” sponsored by Forcepoint, Ponemon took a deeper look at the state of U.S. cybersecurity to determine whether the news headlines are simply hype or is U.S. cybersecurity really a growing problem?  Most importantly, what can we do to fix this?

The research confirmed that U.S. cybersecurity attacks are, in fact, a growing problem. In the past 12 months, both the volume and severity of cybersecurity incidents have increased.

According to the survey:

Beyond that, only 15% of respondents reported that their IT security teams could detect a security incident in less than 40 days. Other agencies reported a detection time of anywhere from 41 days to more than 200. Also concerning is the fact that most agencies rate their ability to prevent and detect a cyberattack as very low. Only 34 percent of respondents rate the ability to prevent and quickly detect a cyberattack as high or very high.

What will it take to improve U.S. Federal cybersecurity?

Previously there were quite a few models and definitions for Zero Trust that agencies have been working toward implementing.  However, the EO suggests that agencies should “incorporate, as appropriate, migration steps that the National Institute of Standards and Technology (NIST)…has outlined in standards and guidance.”

This may help to provide a standard definition and framework upon which agencies can and should build. And the good news is the majority of agencies indicated in the Ponemon study that they are relying on the NIST 800-207 Zero Trust architecture as they build out their Zero Trust solutions. While those are positive developments, the survey showed that many agencies are using multiple models to execute against their Zero Trust plans: 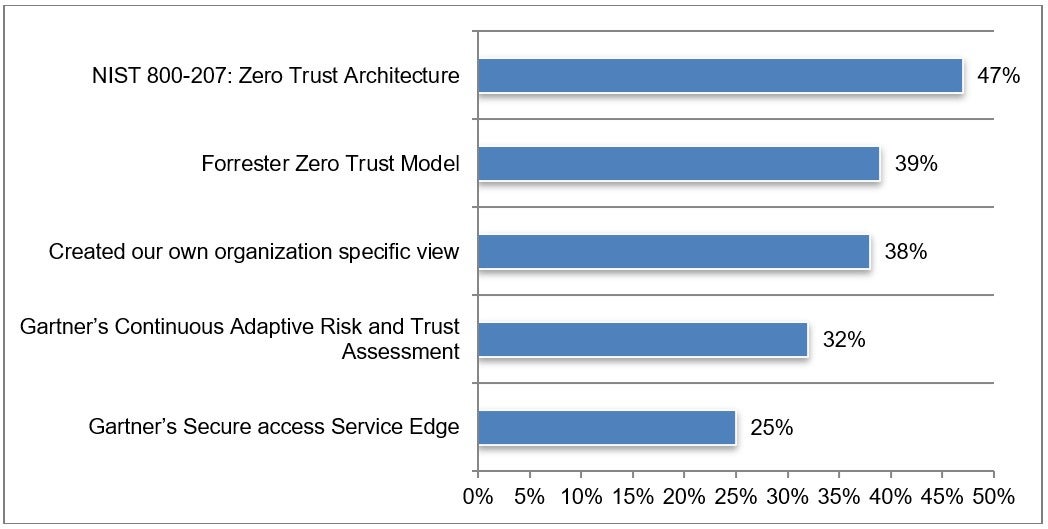 61% of agencies surveyed also suggested understanding human behavior is important to proactively detect risks and secure data and human behavior.  This aligns with the NIST Zero Trust tenet that states, “Access to resources is determined by dynamic policy—including the observable stateof client identity, application/service, and the requesting asset—and may includeother behavioral and environmental attributes.”

Download the full report to find more details on the specific threats agencies are seeing and for visibility into other approaches and technologies agencies are adopting to move left of breach and stay ahead of adversaries.