For many, ‘virtual’ currencies such as Bitcoin remain a mystery primarily associated with online criminals, despite no longer being far removed from the monetary system and transactions we’re used to. This article is intended to serve as a primer, rather than one of our more usual technical analyses: cryptocurrencies continue to play a key role in many areas of cyber-crime being used for everything from online marketplace transactions to ransomware demands. However, with a number of legitimate organisations ranging from the Bank of England to EY also taking an interest cryptocurrencies and the technologies behind them, it’s worth being informed.

The 2000s saw an increase in the number and utility of entirely virtual currencies (as opposed to digital currencies backed by some form of legal tender).

A number of dry definitions of ‘virtual currency’ exist, with the European Central Bank defining it as:

“a type of unregulated, digital money, which is issued and usually controlled by its developers, and used and accepted among the members of a specific virtual community”[3]

By this broad definition, a number of things qualify as virtual currencies: while some online games such as World of Warcraft forbid the exchange of the in-game currency for any other form of money, a black market engaging in just this exists. Equally, a number of online marketplaces – especially within the gaming community – require the one-way exchange of legal tender for virtual currencies, e.g. Microsoft Points.

Of course, a common feature of all of the currencies discussed so far is that they’re centralised: the Federal Reserve is the centralised authority and repository for US dollars, GS&R – the company behind E-Gold – held a centralised ledger tracking transactions, and Microsoft naturally keep track of Microsoft Points.

While not legal tender, the value of these currencies is agreed and accepted by all of the parties involved – much as people generally accept the declared value of paper money or an electronic bank transfer.

The arrival of Bitcoin in 2009 – the first and, arguably, most famous decentralised virtual currency – had a significant impact.

Cryptocurrencies are so-called because of their use of cryptographic functions to secure transactions and limit the creation of new units of the currency. While not the first cryptocurrency, Bitcoin is once arguably the most famous example and was the first to be ‘decentralised’.

Instead of a centralised ledger (as would be the case with traditional currencies/government central banks), Bitcoin uses a public ledger known as the ‘blockchain’. Bitcoin transactions are broadcast to a network of privately operated nodes running Bitcoin software, a subset of which verify and process the transactions into groups called blocks (these machines are known as miners). All nodes keep a record of these blocks (hence ‘blockchain’) once they have been processed, thus keeping a distributed record of transactions and ownership.

Owing to the distributed and open nature of the blockchain, transactions and wallets are freely available to view online at sites such as blockchain.info.

As miners are rewarded with Bitcoins in the form of both newly created Bitcoins and any transaction fees included within the block, the supply of Bitcoins is slowly increasing. To temper this flow, any new block requires a ‘proof-of-work’ to be accepted by the rest of the network. In brief, this is a task that takes a long time to complete but a short time to double-check.

In the case of Bitcoin this proof-of-work is based on the SHA-256 hashing algorithm and is ultimately constrained by CPU speed, prompting the creation of specialised mining 'farms' such as the one pictured below (picture credit: Marco Krohn; CC-BY-SA-4.0). 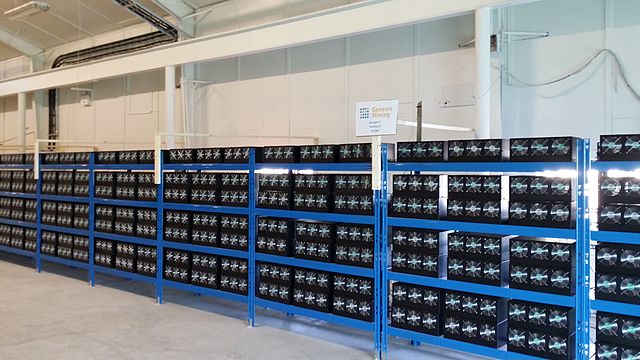 Although it’s the most well-known and has by far the highest market capitalisation, Bitcoin is far from the only cryptocurrency. The table below provides some insight into the top five ‘challengers’ to Bitcoin as of February 2017[4].

See the glossary below for a brief description of any domain-specific terminology.

CPU-Bound    Refers to algorithms – in this case related to blockchain process/mining – for which available CPU processing power is the limiting factor in processing speed.

Memory-Bound    Refers to algorithms for which available memory (RAM) is the limiting factor in processing speed.

Mining    In proof-of-work cryptocurrencies, the activity of processing transactions to prove their veracity and achieve distributed consensus. The first miner (or group) to meet the proof-of-work criteria for a block of transactions is typically rewarded financially through either the creation of new currency, transaction fees, or both.

Proof-of-Work    A method of proving that work has taken place, typically through computationally intensive tasks that are quick to verify when completed. In the case of cryptocurrencies, this generally means transaction processing and hashing and the methods are usually either CPU-bound or Memory-bound.

Proof-of-Stake    An alternative type of cryptocurrency where the creator of the next block is determined pseudo-randomly, weighted by the amount of the currency they hold (i.e. their ‘stake’).